Diplomatic Security under a Comparative Lens—Or Not?

Diplomatic Security under a Comparative Lens—Or Not? 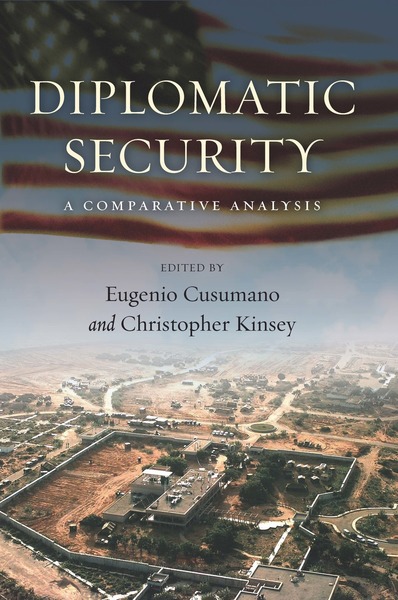 “Diplomatic security” is the term now usually preferred to “diplomatic protection” for the steps taken by states to safeguard the fabric of their diplomatic and consular missions, the lives of their diplomatic and consular officers, and the integrity of their communications; it has the advantage of avoiding confusion with the controversial legal doctrine of diplomatic protection.[1] The book under review here, Diplomatic Security: A Comparative Analysis, edited by Eugenio Cusumano and Christopher Kinsey, contains the views of scholars from China, the United Kingdom, France, Germany, Russia, Italy, Israel, Turkey, and the United States on three issues: first, the policy of their state on diplomatic security, including its home-based administration; second, the ways the policy was shaped by national attitudes and circumstances; and third, the effectiveness of that policy. A final essay looks at the whole subject from a “critical” perspective, while a conclusion is provided by Cusumano.

There is much valuable detail in this volume, and several of the essays—especially those written by persons who had previously worked in diplomatic security—are unquestionably authoritative. I was interested to learn, for example, that China still relies to an unusual extent on the receiving state for diplomatic security, although it is expected before long to adopt the “‘best practices’ of other great powers” (p. 51); that, in part to avoid the need for parliamentary approval, German soldiers sent at short notice to protect any seriously threatened foreign mission of the Federal Republic do not carry arms, wear civilian clothing, and have diplomatic status; that the Russian Embassy in Damascus relies on the Syrian Army for protection; that Israel claims to be unique in embracing responsibility for diplomatic security in one “overarching” counterterrorist organization designed to protect, via both intelligence gathering and operational engagement, Israelis at home as well as abroad; and that incompetence consequent upon nepotism in the Turkish foreign service has compromised the security of Ankara’s communications, to the North Atlantic Treaty Organization’s cost. But valuable detail is one thing; the comparative analysis promised in the sub-title to the book is another.

Cusumano and Kinsey outline their method in their introduction. It is to employ case studies of the diplomatic security policies of nine states that are so “structured” by the same questions as to enable “an empirically rich comparative analysis” (p. 6). I take it that by this they mean the production of generalizations about the subject that are at the least suggestive hypotheses to be tested by further research in what they rightly say is an under-explored field. There are, unfortunately, a number of serious weaknesses in their approach.

First, a volume consisting of case studies, which only in occasional asides if at all comment on the practice of other states, clearly does not in itself amount to a “comparative analysis,” which is why it is rather baffling that Cusumano commences his conclusion by remarking that his task is to “complete the comprehensive comparative analysis of diplomatic security in this book” (p. 223, emphasis added). In fact, such comparative analysis of diplomatic security only begins with the conclusion, although this is a long one (twenty-four pages, including endnotes), and I shall make some observations about the content of this later.

The second problem with this approach is that the selection of the cases—the UN Security Council Permanent Five plus four other major powers—is idiosyncratic. No explanation for this selection is provided, other than that these states all have missions in dangerous places, have been “increasingly confronted by the threat of terrorism,” and have treated diplomatic security as an “urgent issue” (p. 6). (The last claim is in any case questionable on the evidence of the Turkish chapter.) Many other states meet the same conditions for selection, among them some smaller states that have suffered serious attacks on their diplomatic or consular missions in recent years, not least in the Middle East and North Africa: for example, Bahrain, the United Arab Emirates, Algeria, and Morocco. It would surely have been instructive to include some smaller states at the expense of some of the larger ones, or alternatively some from other regions, such as South Asia, central and southern Africa, and South America.

The third and most serious problem is the country focus itself, even were it to have had a more representative sample. A serious comparative analysis of this subject would have been problem-focused. It would have begun with chapters on the changing threat and the administrative response and then proceeded with individual chapters on the changes to buildings and compounds, location, types of guard, and communications—with the effectiveness or otherwise of each considered in turn. This would have brought much sharper focus to the key questions raised by the subject, encouraged the net to be cast much wider for comparative evidence, and made an infinitely more valuable contribution to public policy. It would also have produced a more elegant book, for out would have gone the irrelevant descriptions of the great geographical spread of the selected states’ diplomatic representation and above all the over-long accounts of the deadly attacks suffered by their foreign missions, both of which are a prominent feature of most chapters in this volume.

Since, for good reasons, great secrecy veils much of how states go about providing security for their diplomacy, the editors freely acknowledge that their authors faced great difficulties in obtaining evidence for their studies and had to rely on “existing unclassified information” (p. 6). And this lament is echoed by more than one of the authors themselves. With the honorable exception of Thomas Stocking’s chapter, “Risk Management in US Diplomatic Security,” the consequence is that there is relatively little in this book on the methods actually employed in the provision of diplomatic security, and therefore on their effectiveness as opposed to related subjects, such as the bureaucracies and units that handle it and the national cultures of which they are an expression, useful though these treatments are.

Weakened both by the limitations of its methodology and the obstacles in the way of obtaining primary source evidence on the most important point, it is hardly surprising that this book drives to unexceptionable conclusions. In his winding up, which is nevertheless full as far as it goes, Cusumano says that the case studies demonstrate an “increasingly widespread awareness of the importance of effective diplomatic security arrangements” and a corresponding increase in its bureaucratic focus in foreign ministries, and that this is a function of the presence of so many embassies and consular posts in “developing states fraught with social unrest,” the “growth of international terrorism,” and the recent appearance of “expeditionary diplomacy,” although the last is by no means as new as he supposes (pp. 224-25, 225, 226).[2] And yet, he rightly notes, there remains a marked reluctance on the part of diplomatic officers to allow themselves to be protected too much, partly because of the poor impression this creates and partly because it impedes their freedom of movement. There are also “clear differences” between states in the “type of actors … tasked with providing diplomatic security,” although private security contractors—who are more readily controlled by foreign ministries and have a lower profile than military units—are becoming popular (p. 228). But this is not evidence that diplomatic security policy is “converging in an isomorphic process,” the view expressed in the China chapter (see above) notwithstanding (p. 229). Aside from the enduring influence of different national traditions and different propensities to accept risk, using soldiers or policemen as guards usually means that some of the costs of diplomatic security are borne by defense and interior ministries, which is a point well taken. Another is Cusumano’s conclusion—in a particularly strong, skeptical analysis of risk management methodology—that the increased attention given to diplomatic security and widespread disposition to close diplomatic posts in dangerous places only as a last resort are a vindication of the continuing value attached to “traditional, face-to-face diplomatic relations,” although he overlooks the important point that another reason for this is that such posts routinely give cover to large numbers of intelligence officers (p. 236).[3]

I am less impressed by the somewhat strained argument in the conclusion that the investigation of diplomatic security policies is a “source of insight into the architecture of the international system,” revealing in particular that in recent decades its vastly important norm of diplomatic inviolability “has been increasingly violated” (pp. 238, 240). For this is like saying that the rules of football have been increasingly violated by crowd invasions of the pitch. Diplomatic inviolability is a norm between states, and—with the odd exception—it is not states that have been attacking embassies.

What policy recommendations are offered by this book? In the final essay, “Securing Diplomacy in the War on Terrorism: A Critical Perspective,” which sits uncomfortably into the plan of this volume, Clara Eroukhmanoff appears to say little more than that diplomats would be much safer if they were to withdraw from all association with the military. So any diplomat interested only in “short-term solutions,” such as one drafted as political adviser to an armed forces commander, can safely ignore this chapter (p. 215). As for Cusumano, in addition to advising the obvious need to strike a balance between the demands of diplomacy and the demands of security, he has only one suggestion: that the corporate body of diplomats of all states in receiving state capitals should be exploited. So as to avoid the risk of a poorly protected mission being an attractive terrorist target, the members of the diplomatic corps should compare notes on the local security situation and promote a uniform response relative to the physical security of all diplomatic premises in the capital, which he rightly regards as “much more feasible” than a similar plan in regard to their diplomatic communications (p. 243). This is a useful idea that might fly in some situations and probably already does, at least among politically aligned groups within the diplomatic corps. (The term “diplomatic corps” is used in its correct, multinational sense in this last passage of the book but is widely used incorrectly elsewhere as a synonym for the essentially national “diplomatic service,” thereby blurring an important distinction.)

In sum, this book contains much of interest, features some passages of penetrating analysis, and flags up a subject well worthy of scholarly interest but is weakened unnecessarily by poor methodology and unavoidably by the difficulty of penetrating primary sources on such a sensitive subject.

First published on H-Diplo at URL in ‘Citation’ above in November 2019. Reproduced here by permission, for which I must express my thanks to Seth Offenbach of the City University of New York.