Room for Diplomacy: The history of Britain’s diplomatic buildings overseas, 1800-2000

Room for Diplomacy: The history of Britain’s diplomatic buildings overseas, 1800-2000 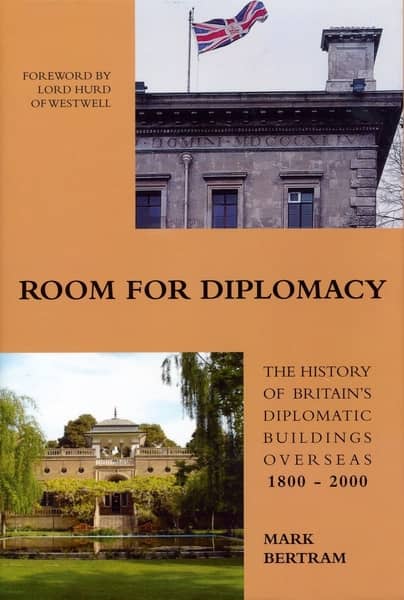 Mark Bertram joined the Ministry of Public Buildings and Works after reading architecture at Cambridge and remained in the civil service as architect, project manager, administrator, estate manager and – in his own words – ‘quasi diplomat’ for the next thirty years. He was the ministry’s regional architect in Hong Kong in the 1970s, moved to the Foreign and Commonwealth Office when it secured control of its own buildings abroad (the ‘diplomatic estate’) in 1983, and was soon head of the estate department. On surrendering that role in 1997 he became a professional adviser to the FCO. He is therefore exceptionally well qualified to have written a book of this nature.

The structure of his work, which has 20 chapters, is a good blend of the thematic with the chronological: for example, ‘Chapter 4: Consulates 1850-1900’, and ‘Chapter 5: Legation Houses 1850-1900’; and ‘Chapter 13: New Commonwealth 1947-1983’, and ‘Chapter 14: Roles, Rules and Rations 1950-1970’. Its greater part consists of detailed descriptions of building types and individual buildings during different periods, together with accounts of the debates their planning prompted at home, some of them acrimonious. Interleaving most chapters, however, are illuminating discussions of the general questions prompted by the subject, and it is these that I found particularly interesting.

The first among these questions to mention because it helps to understand the others, even though it will probably be the one of least interest to students of diplomacy, is where in the government machine overall responsibility for the diplomatic estate should lie. In Britain, this rested from 1824 until 1983 with an already long-established government department responsible for all of central government’s public works (e.g. the British Museum), among which, therefore, the diplomatic estate was only one part; after the 1870s, the Foreign Office did not even have a budget allocation for the overseas estate for the forthcoming year. For most of this period the ministry with overall responsibility for diplomatic buildings abroad was known as the Office of Works, latterly as the Ministry of Works, then the Property Services Agency (PSA). It had its own architects, quantity surveyors, structural engineers, project managers, and so on. In 1983, this all changed when both the responsibility and the money were given to the Foreign and Commonwealth Office; accordingly, the title of the penultimate chapter of Bertram’s book is ‘Diplomats in Control’, with charge of 4,067 properties in 132 countries. The question is: Was this a good thing? The PSA thought that the diplomats would give insufficient attention to long-term value for money, while the diplomats believed that only they were able to give the right priority to the estate as ‘a tool of British diplomacy’ (p. 403) – and henceforward would be in a position to do so, while being determined to make it cost-effective. Provided a foreign ministry is held to account by a well-qualified select committee of a parliamentary assembly, I am sure that the author is right to support the diplomats’ view.

The second general question is how to acquire and hold property. Initially, envoys and consuls had to find and rent their own, in the last case sometimes – notably in nineteenth century China – even boats moored offshore. Subsequently, governments such as that of Britain assumed the responsibility but were then faced with the choice of whether to lease or purchase existing properties of promise – or build their own. Britain took its first steps in the last direction in the early nineteenth century. Bertram examines, too, a variant on leasehold that began to be exploited by the British in the early twentieth century in cities with ‘relatively sophisticated property expertise (p. 227).’ This was the ‘developer deal’, in which a developer agreed to provide an acceptable site and erect on it a building to an approved plan; in return, the government signed up to rent it for a fixed term of years, usually a long one. The British consulate-general building in Jakarta was erected on this basis at the beginning of the 1930s and continued to be leased by the government until 1981. The advantages and disadvantages of the various options in different circumstances are thoroughly considered.

The third question to arise when the government began to build embassies and consulates was how to design them. When the first resident embassies were established in the early modern period ambassadors and their companions (official and unofficial) lived and worked together in one house. In the British case, Bertram tells us, the growing demand for office space consequent upon the expansion in diplomatic responsibilities following the First World War led to a feeling in London that embassy offices should be lodged separately from the ambassador’s house: the offices (henceforward ‘the embassy’) in the business centre and the ambassador’s living accommodation and ‘machine for entertaining’ (henceforward ‘the residence’) in the cheaper and more spacious suburbs, with the corollary that separate accommodation also had to be offered to the other diplomatic staff. But to the extent that this change came fully to pass after the Second Wold War it was not accepted without stiff resistance by the senior diplomats, who argued that the old design was more efficient as well as more convenient and that, besides, civil servants in London did not grasp the prestige that attached to having one large building in a city centre. A downside to the separation of embassy from ambassadorial residence felt more strongly in London was that it ‘opened the way for more individualistic and transient enthusiasms to flourish on the part of incumbents’ in regard not just to furnishings of the residence but also to modifications to existing buildings and plans for any replacement. ‘The scope for altercations [with London],’ writes the author with feeling, ‘was endless’ (p. 326). Not least because incumbent ambassadors were likely to have left their residence for a new one before any major building works were completed and their successors might possibly have quite different ideas, London’s tolerance for their views had to be strictly limited.

Another question of design that caused tension was the extent to which the operational requirements of a new building should be moulded by stylistic considerations, whether with a view to making it blend into the local milieu or – more usually – project a desired image of the sending state. A related question was whether or not commissions should be awarded to high-profile private architects, who would probably be more difficult to control than those in government employ but might be expected to produce eye-catching results. Style did not begin to become a significant consideration until the late 1950s, when architectural anathemas were heaped on the ‘straight blocks’ to which the Ministry of Works had given birth after the Second World War. At this juncture, private architects were commissioned to design diplomatic buildings for the first time since, exceptionally, the famous Sir Edwin Lutyens had been employed to design the new embassy and residence in Washington, completed in 1930. But the experience of the Ministry of Works with the three projects concerned was not, says Bertram, a good one. Neither the new residence at Lagos by Lionel Brett, occupied in 1961, nor Basil Spence’s Rome Embassy, opened ten years later, were judged to have been operationally ideal by their occupants, and the design for a new embassy and residence at Brasilia by Peter and Alison Smithson was abandoned after a three-year struggle, in part because it was too ambitious and could not be afforded. Henceforward, the government took more care to appoint in-house architects with good track records, better match the professional strengths of private architects to the challenges of each project when commissioning, and tighten up project management.

A further question of design that caused difficulties for traditional reflexes as its importance increased in the last quarter of the twentieth century was how to modify existing buildings or build new ones with physical defence in mind: the question of what is now usually called ‘diplomatic security’. Unfortunately, although understandably, British practice in regard to the defence of diplomatic buildings against attack by terrorists or politically agitated mobs is a subject on which Mark Bertram is noticeably reticent. Nevertheless, here and there his book contains interesting asides on it. He says, for example, that the post-Second World War decision to build residences separately from embassies was later reinforced for reasons of security (p. 358), although he does not say why. Presumably this was chiefly to reduce the likelihood of harm falling to ambassadors and their families by virtue of living in buildings that not only needed to be open to the public but were also correctly assumed to be ‘nests of spies’. (This was a major reason for the notorious attack on and occupation of the American Embassy in Tehran in November 1979.)  He also mentions the security advantages of compounds in the Middle East and Asia, which ‘derived from the military cantonments of India’, and reminds us that they were also prompted with a view to providing a ‘healthy, communal, uncrowded, fairly self-sufficient living and working environment’ (pp. 87, 335) – points I had omitted to mention in my article ‘Diplomatic security and the birth of the compound system’ . He mentions more than once that secure or ‘classified’ offices were always placed on the top floor of buildings (p. 314), which is well-known. Further, during the Cold War, such very limited work as had to be done on British missions in Warsaw Pact countries was done by security-cleared personnel from the UK and all materials were UK-sourced and delivered by diplomatic bag (p. 258). And he gives a brief mention of the FCO’s 1985 security review, which ‘made proposals for relocating some [buildings in unsafe environments] and strengthening the defences of others in respect of site perimeters, gates and barriers, and glazing’ (p. 418). But that – apart from the account of the building of the new embassy in Moscow, opened in 2000, where measures designed to prevent electronic eavesdropping were the main security concern – is it as far as this subject is concerned.

With the reservations that there is – albeit understandably – too little on security and perhaps too much on the careers of individuals, Mark Bertram has written a book on his subject of unrivalled authority and with great clarity. Occasionally, too, a droll sense of humour shines through his text (‘It is an illusion to imagine that bureaucracy lessened in time of war: it just used smaller sheets of thinner paper’, pp. 232-3). The author is at ease with the diplomatic lexicon and provides just the right amount of political context. The book is also carefully sourced, with many references to documents located in The National Archives in London; and it has innumerable illustrations, a bibliography, and good analytical index. It is also supplemented by full descriptions and illustrations in a ‘Catalogue of British embassy and consulate buildings, 1800 – 2010’ on the Web which is freely available here. Room for Diplomacy is unique in accounts of British diplomacy and I cannot recommend it too strongly. The author’s publisher, Spire Books was dissolved in 2016, but it can still be obtained, most cheaply direct from the author via this page.

We use cookies on this site to enhance your user experience.


By clicking 'I agree', you are giving your consent for us to set cookies